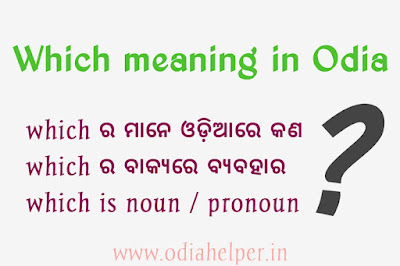 Which meaning in Odia

Which pronounciation in Odia– ହୁଇଚ

Part of speech- Pronoun (which is a pronoun)

In the above I just specified the most prevalent meaning of which in odia, but it can be used in some other way with a little bit difference in meaning. Follow following sentences for different Meaning of Which in Odia and there uses in sentences.

Use of Which in Odia

I am going to explain with example the meaning and use of which in odia language. So get into it to know better.

This means to choose something or someone from a set of things or peoples. Such type of sentences are always interrogative sentences that ends with question mark.

I) Which bicycle is yours from all these ?

I hope you may understood the use of which in odia language. You can also use this word in another way with slightly different meaning.

This means while we refer something or some events that already happened, then which word is used. Such type of sentences are generally declarative sentences that ends with full-stop mark.

I) Ganesh Puja 2022 which was observed on Wednesday.

II) Our school’s annual sports which ended on Saturday.

So in this way you can use which word in odia language. If you are really wants to learn odia language then you’re most welcome and also a lots of thanks from me.

English is a widely spoken language across the globe and also the most common means of mode while interacting with others like foreigners. There are different variety and versions of english language, there pronounciation style also differs. In India the English we used is UK based and exactly britishers had brought this language to our country. You should have knowledge of this language as it is the most common official language in government works and gazettes. Do priority to your mother tongue first.

Odia is the official language of Odisha state and one of the recognised language of India among 22 languages under 8th schedule of Indian Constitution. Although Odia is not spoken world wide and definitely not a pan-Indian language, but it’s the emotion of 5 crores of Odia. It’s the most sweetest language I ever heard and you should learn it. Generally Odia language speaking people referred as Odias.

This post is not dealing with any big topic or issue, but for those who really wants to learn odia language. I am an odia and an odia can explain his language in a best way. If you appreciate I do so, then plz leave a positive comment for me inside the comment box. You now learned Which meaning in Odia through this article. Thanks for visiting.