Rudrani Odia Movie Release date, Starcast, Story Prediction, trailer released, crew member details and all other details are given in this post. 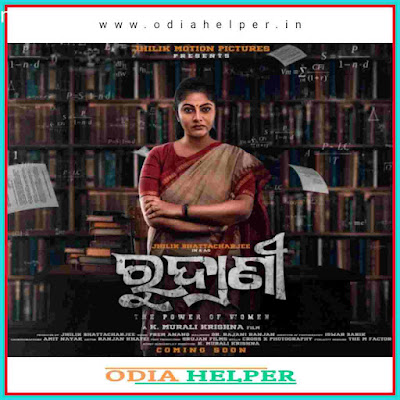 Jhilik Motion Pictures, the newly emerged production house in Odisha have announced some movies to be released in near future. One of these is Rudrani Odia Movie will be soon in theaters.

Are you really ready to watch and cheer for this movie ?

I know you are confused with the tentative release date announced and changed later. So all details of Rudrani Odia Movie is available here, You can check now.

This Rudrani Odia Movie is going to be the first venture of Jhilik Motion Pictures production house. The movie is all set to release on this diwali in your nearest theater cinema hall.

In Rudrani Odia Movie all will see the power of women. Basically that’s the tagline of this movie, hopefully this movie is all about women empowerment.

Director of this Rudrani Odia Movie is K. Murali Krishna and producer of this movie is Jhilik Bhattacharjee.

Music in the movie is directed by famous legendary music director Prem Anand. So you may expect some beautiful song lyrics along with amazing music combination.

The movie will starred Jhilik Bhattacharjee in lead role as Rudrani Madam and Ollywood actor Subhasis Sharma will be in co-lead role. Viewers will see this new jodi in cinema for the first time.

I know you are now excited to know something more about Rudrani Odia Movie and it’s all crew members. So let’s explore it.

Previously this movie was scheduled to release on Dussehra, but due to lack of availability of sufficient cinema theaters for screening, the date postponed.

Until today on which the post published publically, the news about Rudrani Odia Movie Release date is coming frequently with confirmation also.

So, this Rudrani Odia Movie will be release on this Diwali 2022. So you can imagine or assume the release date to be on October 21, 2022.

This date may change by the crew members for any reason. If any change occur, then we will update first at here. So you can bookmark this page on your browser.

As the movie is releasing under Jhilik Motion Pictures banner, so you can imagine about the Rudrani Odia Movie Starcasts name.

She is a brilliant actress and people like to watch her in movies. In past she appeared in abundant blockbuster hit ollywood movies. This star actress also started her career in movie production.

Male lead role in Rudrani Odia Movie is done by Subhasis Sharma. He started his career as a seriel actor and currently working on some movie projects.

As the movie is focusing on women empowerment, So you may see little dominance of male actor (hero).

I personally happy after seeing women empowerment concept in movies. This is great.

Besides them, there are also other star actors playing important characters in this movie.

The story of Rudrani Odia Movie is based on women empowerment with having tagline The Power of Women.

There are some rumours that the movie is copied from South Indian movie Madam Geeta Rani. We have not any confirmation in this but the trailer seems so.

Rudrani Odia Movie Story is based on the journey of a women professer named Rudrani against the corrupted education system.

She stands and fight alone against the illegal practices and corruption going on a college in which she is posted as principal.

This movie is all set to give a social message against the education mafia and the corrupted education system.

However, we are predicting this Rudrani Odia Movie Story on the basis of trailer. Let’s hope for the released movie.

From the trailer one can predict the story of the movie to some extent. But i think you don’t need to do this as the movie will be in theaters soon.

The crew of Rudrani Odia Movie is as follows.

We always welcome movies with original story and unique concept rather than dubbing and copying.